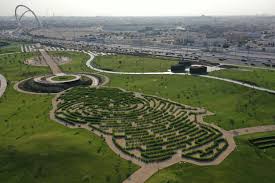 The park show off a large plant maze that no other parks have in Doha. It’s planned in the shape of Qatar’s map and motivated by the human fingerprint. It has an approximate total area of 6500 sqm, a total longitudinal length of 138m, and a width of 69m. It’s the prime focus of the park.

It has signage along the entrance and exits to the maze posturing the names of Qatar’s coastal cities.