Home News In a traditional atmosphere, the inauguration of Al Thumama Stadium, the sixth... 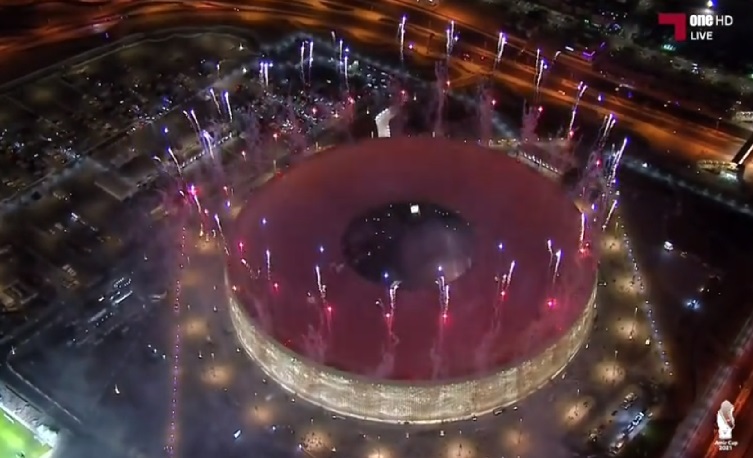 In a festive and traditional atmosphere, Qatar inaugurated Al Thumama Stadium, the sixth stadium for the FIFA World Cup Qatar 2022, which witnessed the final match of the forty-ninth edition of the Emir’s Cup competition, which brought together Al Sadd and Al Rayyan teams, and ended in favor of the former with a penalty shootout result ( 5-4).
The ceremony, which was attended by a large crowd gathered around the stadium, was presented by HH the Emir Sheikh Tamim bin Hamad Al Thani, along with a number of local and international officials, most notably Mr. Gianni Infantino, President of FIFA.
The ceremony included paragraphs and scenes that embody the traditional customs and traditions that characterize the people of Qatar and the region, and express the customs of wearing the gahfiya, the traditional woven hat worn by men in Qatar and the region, and it is an indispensable piece under the ghutra and iqal.
The most prominent paragraphs of the opening ceremony were a scene of one of the women who is keen on her young child to wear the skullcap, and another for children who wear the cranium while learning the Holy Qur’an in one of the scribes, a place where children used to learn the principles of reading, religion, memorizing the Holy Qur’an and hadiths.
Al Thumama Stadium is a unique icon in football stadiums, and a sports edifice that combines the ancient heritage of the State of Qatar and the region, with a modern design that reflects the aesthetic beauty of architecture. It is the sixth stadium to be completed out of eight in preparation for hosting the 2022 World Cup after Khalifa International Stadium , South, Education City, Ahmed Bin Ali, and the House.
Al Thumama Stadium is located 12 kilometers south of downtown Doha and close to Hamad International Airport.
The design of the stadium, devised by the brilliant Qatari architect Ibrahim Al Jaidah, was awarded the prestigious “MIBIM” award for the Future Architecture Projects competition in May 2018.
During the Qatar World Cup, Al Thumama Stadium will host eight matches up to the quarter-finals, and will be held on its soil. The matches of the Arab Cup / Qatar 2021 /, where it will host six matches until the semi-finals.
After the curtain falls on the World Cup competitions in 2022, the stadium’s capacity will be reduced by reducing the number of seats to 20,000, in line with local needs, so that the stadium will be used to host football matches and other sporting events, after dismantling and donating half of the seats and sports infrastructure. To develop sports projects in developing countries around the world.
After the Qatar World Cup, Al Thumama Stadium will be a vital center of attraction serving the local community, as the seats at the top of the stands will be dismantled, a branch of Aspetar Sports Medicine Hospital, and a five-star hotel will be established.
The area surrounding Al Thumama Stadium will include many sports facilities, including basketball, handball, and volleyball courts, as well as a swimming pool, in addition to running and cycling tracks that connect to bicycle paths in the surrounding area. The area will also include spaces designated for shops, providing a community center that meets the different needs of the residents.