European carriers are in for a bumpy ride 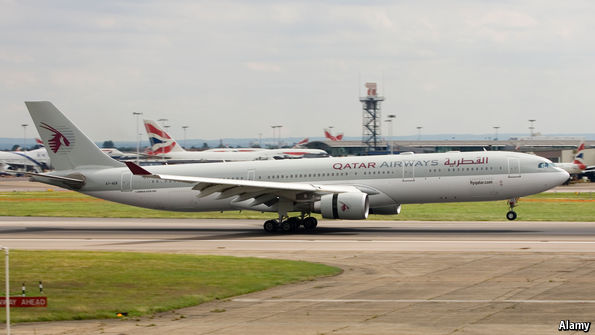 IT IS going to be a long, difficult summer for European airlines; it may well be a bumpy couple of years. Last week, IAG, the parent firm of British Airways, Iberia and Aer Lingus, became the latest carrier to tell of its woes. It reined in expectations of growth in 2016 from 40% to around 15%. To be fair, the airline had warned immediately after the EU referendum that Brexit would likely hurt its profits, as doubts about the economy hit business travel and the resulting fall in the pound affected receipts when converted into euros. In that sense, IAG has merely confirmed its own suspicions.

IAG is not alone in the mire. Europe’s biggest airlines, including Lufthansa, Air France-KLM, easyJet and Ryanair, have already warned of the detrimental effect of not only Brexit, but also numerous terrorist attacks and the attempted coup in Turkey on the aviation market. That might be good for passengers: it is likely that carriers, in the short term at least, will decide to lower fares in order to fill their planes, rather than cutting capacity. And it is not only in Europe that prices are coming under pressure. In America, airfares are at their lowest since 2010, according to the Department of Transportation, partly driven by the downward pressure on transatlantic prices (although the DoT’s figures do not account for ancillary charges, such as for checked baggage, which are increasingly important for carriers.)

One beneficiary of IAG’s turmoil has been Qatar Airways. It found the 25% post-Brexit fall in IAG’s share price too tempting to resist, and has increased its stake to 20% from 15.7%. The Gulf supercarrier was already IAG’s biggest shareholder. Under EU rules Qatar cannot take its stake above 49.9% (and it says it has no immediate intention of increasing its current position further). But outright control of IAG is not its main concern. Qatar, which like BA and its stablemates is a member of the oneworld alliance of airlines, is more interested in feeding its Doha base with transatlantic traffic, particularly via Heathrow, Europe’s most important hub at which BA controls the lion’s share of the slots. (For those who would like a visualisation of the importance of the transatlantic market to world aviation, take a look at the representation below of airline-traffic flow in a 24-hour period, although the effect is exacerbated by spikes in local flights.) Indeed, Qatar is looking to develop operational links with IAG that go beyond simply being part of an alliance, including the joint purchasing of planes and more cooperation with cargo.