Home News Al-Rumaihi, in response to Gargash’s statements regarding the Turkish forces in Qatar:... The Director of the Information Office at the Ministry of Foreign Affairs, Ahmed bin Saeed Al-Rumaihi, directed successive slaps to the UAE Minister of State for Foreign Affairs Anwar Gargash after his statements he made in response to the statements of Turkish President Recep Tayyip Erdogan in which he said that his country’s military presence in Qatar serves stability and peace in the Gulf states, Al-Rumaihi considered that the Emirati minister was not qualified to comment on these statements.

In a compelling response and a new blow to the Emirati official who does not stop practicing his hobby of allegations and lies through Twitter, Al-Rumaihi said in a tweet on his Twitter account, “As for the elements of instability in the region, I do not think that the speaker is qualified to comment on them, especially that you are one of their tools.” In Gargash’s tweet in which he said, “The Turkish president’s statement during his visit to Qatar in which he indicates that his army is working to stabilize the Gulf states as a whole is inconsistent with the Turkish regional role, and the evidence is numerous. The statement tries to divert attention from the economic reasons for the visit, and to be clear, the Turkish army is in Qatar is an element of instability in our region. “ 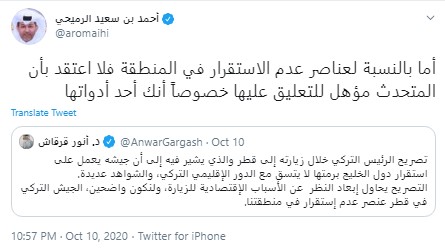