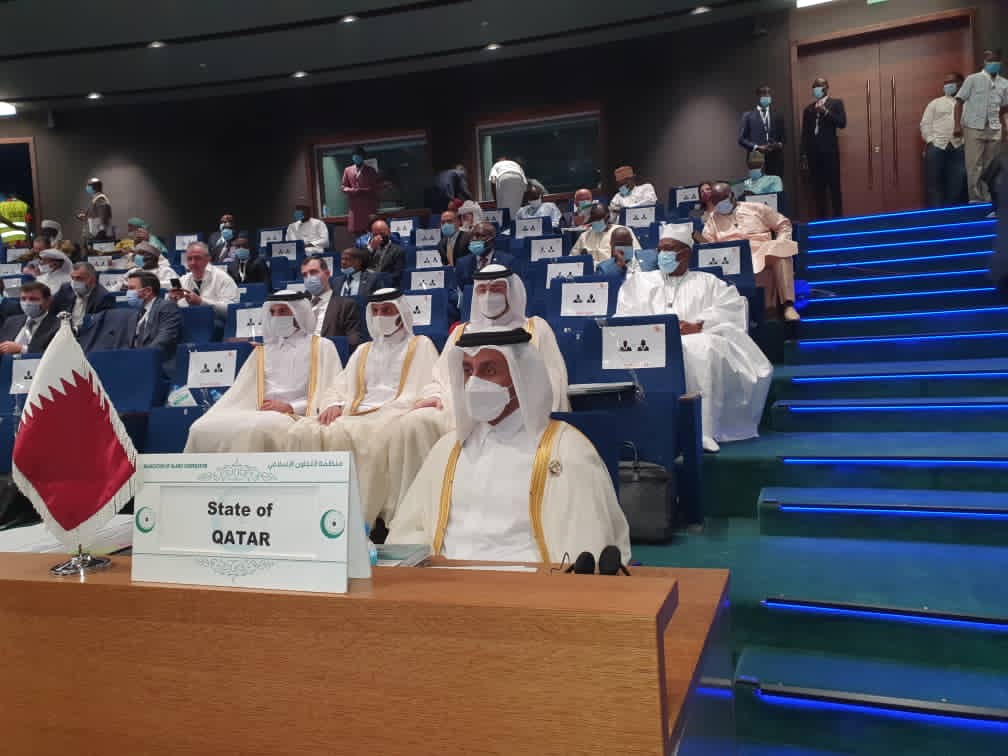 The State of Qatar participated in the work of the 47th session of the Council of Foreign Ministers of the Organization of Islamic Cooperation, which was held in the capital of the Republic of Niger (Niamey).
The delegation of the State of Qatar to the session was headed by His Excellency Mr. Yusuf Sultan Larm, Director of the International Organizations Department at the Ministry of Foreign Affairs.
His Excellency the Director of the International Organizations Department at the Ministry of Foreign Affairs said in the statement of the State of Qatar at the session, that the State of Qatar continues its active role in the framework of international efforts to confront terrorism and participate in international mechanisms to coordinate efforts to combat terrorism and its financing, especially in partnership with the United Nations.
His Excellency indicated that at the national level, the State of Qatar has carefully developed the legislative and regulatory framework for combating terrorism and its financing, and has prepared a national strategy to combat terrorism.
He added, “It is important to keep pace with emerging threats and conflicts, such as the link between terrorism, religious intolerance, escalating xenophobia, hate speech and misleading information, in addition to the issue that the Organization of Islamic Cooperation plays an important role in monitoring and addressing it, which is Islamophobia, and here we urge the importance of serious and collective work to confront escalation against Islam and the Prophet Muhammad, may God bless him and grant him peace, and the Muslims.
His Excellency indicated that this meeting is being held and the world is facing many challenges that require strengthening solidarity and cooperation between the members of the organization and all countries of the world, especially as the Coronavirus (Covid-19 /) pandemic has affected everyone, and this pandemic has imposed itself on top of priorities.
His Excellency indicated that this pandemic has changed the features of societies and the activities of states and individuals everywhere, and highlighted the importance of ensuring stability, enhancing security, development and consolidating human rights so that international peace and security are not affected by any urgent threats.
He said, “The State of Qatar has assumed its shared responsibility towards this pandemic, by cooperating with the United Nations, and providing governmental and non-governmental humanitarian aid to many countries around the world. It has also established many field hospitals in the affected countries, and has spared no effort in providing urgent medical aid.” Where it supported the Global Alliance for Vaccines and Immunization and health care organizations working to develop vaccines and health care resilience with $ 140 million.
His Excellency the Director of the International Organizations Department at the Ministry of Foreign Affairs stated that working in an international and pluralistic framework is not only necessary to address emergency crises, but rather is essential to address common risks such as combating terrorism and extremism, eradicating poverty, and addressing the misuse of technology for illegal purposes, as well as development challenges. And climate change.

His Excellency Mr. Yusuf Sultan Larm, Director of the International Organizations Department at the Ministry of Foreign Affairs, continued, saying, “In this regard, we would like to refer to the contribution announced by His Highness Sheikh Tamim bin Hamad Al Thani, Emir of the country,“ may God protect him ”, in an amount of 100 million US dollars. The State of Qatar, in recognition of the role it has always played and in support of international efforts, will host the Fifth Conference on the Least Developed Countries, Landlocked Developing Countries and Small Island Developing States in January 2022.
His Excellency pointed out that while “we are talking about the need for a collective approach and collective frameworks to address common challenges, the State of Qatar is still facing an unfair blockade and unilateral coercive measures imposed on it without justification, unlawfully and in violation of the United Nations Charter, international law, international norms and the principles of relations.” Friendly countries, especially those brought together by one organization, such as ours. “
He added, “Although more than three years have passed since the insistence on these unilateral policies, the State of Qatar continues to adhere to its principles of reducing tensions and resolving crises through dialogue, and in accordance with the principles of the peaceful settlement of disputes and respect for international law. Therefore, it has resorted to international legal frameworks.” In the forefront of which is the International Court of Justice, to confront the measures that target it in violation of the United Nations Charter, international law, international conventions and covenants, and human rights. “
His Excellency noted that “the Palestinian issue remains for the State of Qatar the central issue,” reaffirming its “principled position in support of all sincere efforts aimed at reaching a settlement of the Palestinian issue through achieving a two-state solution in accordance with the terms of reference of the peace process, international legitimacy decisions and the Arab peace initiative, in a manner that guarantees the establishment of The independent state of Palestine based on the 1967 borders, with East Jerusalem as its capital, and settling all final status issues. “
“This settlement requires ensuring that the Palestinian people enjoy their inalienable rights, an end to the Israeli occupation of the occupied Arab lands, including the Syrian Golan, an end to illegal settlement activity, attempts to annex lands illegally, and an end to measures aimed at changing the character, legal status and composition of Jerusalem,” he said. The demographic and all other practices against the Palestinian people that violate international law and human rights.
His Excellency the Director of the International Organizations Department at the Ministry of Foreign Affairs said that what is worrying is the deteriorating Palestinian economic situation, especially in the Gaza Strip, which is under constant siege that has caused great human suffering.
He added, “In the context of Qatar’s endeavor to play a constructive role to create the appropriate environment to reach peace and respond to the economic and humanitarian difficulties facing the brotherly Palestinian people, we have continued to provide humanitarian and development support to address urgent and long-term needs in areas including education, electric power supply, infrastructure strengthening, maintenance and housing construction.” And financing job opportunities, in addition to enhancing our contributions to the United Nations Relief and Works Agency for Palestine Refugees / UNRWA /.