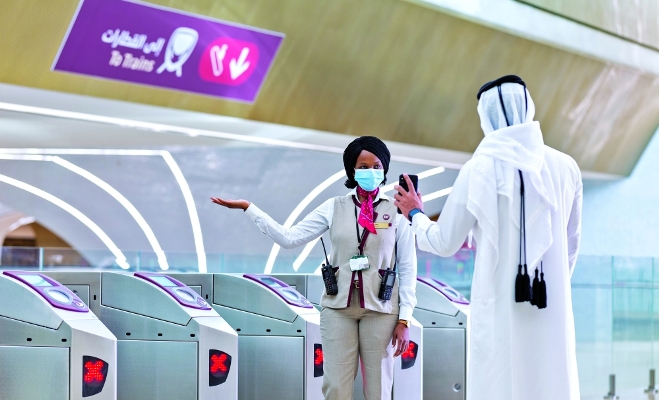 A number of users praised the great efforts made by the government during the last period, which witnessed remarkable progress in combating the spread of the new Corona virus and gradually returning to collect sectors to what they were in the past, through four stages, the last of which was launched yesterday Good turnout on the metro with the tightening of precautionary measures by launching the metro network Doha again, stressing that all stations adhere to the precautionary measures approved by the Ministry of Public Health as well as the Supreme Committee for Crisis Management, starting with making sure of the passengers ’health mark on the application of precaution, and then ensuring their temperatures, which should not exceed 37.5, while obliging them to wear masks for the entire duration Their presence in stations or on trains, in addition to spreading sterilizers throughout, pushing passengers to leave a two-meter social safety distance, by reminding them of the obligation to adhere to by hanging a large number of posters that obligate to follow this precautionary measure.

While some of them expected an increase in demand for the Doha Metro during the next stage, which will witness the end of the annual leave period and the majority of employees returning to their normal working hours, with companies operating at a rate of 100%, given their full confidence in this mode of transportation and their assurance of their commitment to all precautionary measures. , Which would reduce the possibility of catching the Covid 19 epidemic, in addition to the official launch of Legtaifiya station, which will double without any doubt the need for individuals to the metro, waiting for the pressure on the roads and the decrease in congestion rates that it witnessed in the last stage thanks to the operation of the three lines of the metro With all its stations.