Home News Pompeo: It is time to end the Gulf crisis and open the... 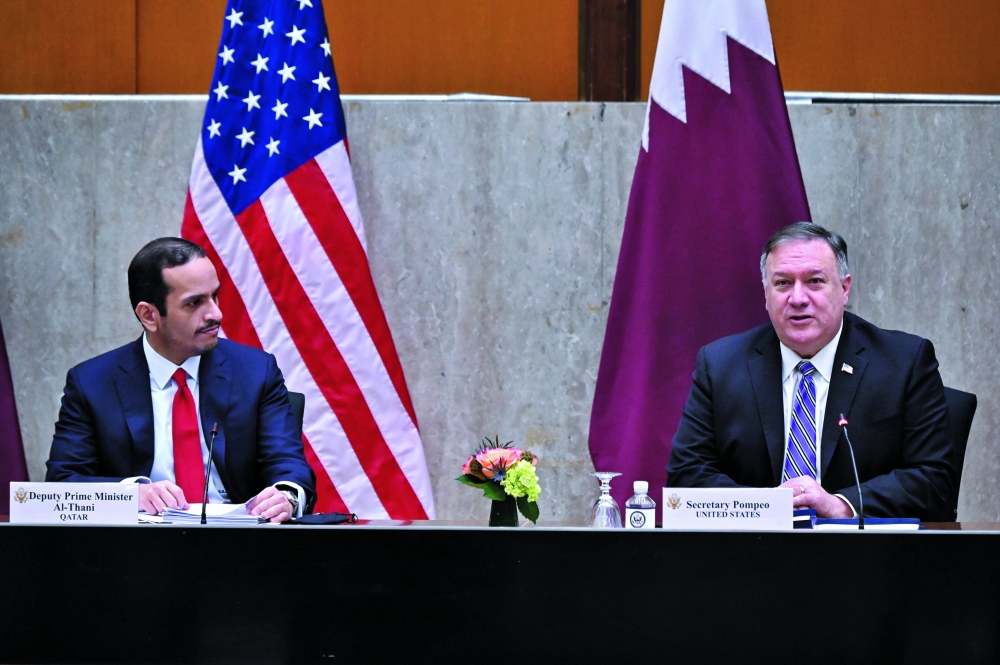 Yesterday, US Secretary of State Mike Pompeo called for a solution to the Gulf crisis and the opening of the borders with the State of Qatar, saying: The Trump administration is keen to see a solution to this conflict and reopen the Qatari air and land borders that are currently closed with other Gulf countries, and we are looking forward to progress on this issue and that it is time for a solution. the crisis.

In opening the third strategic dialogue between Qatar and the United States, US Secretary of State Mike Pompeo expressed his thanks to the State of Qatar for the efforts that are taking place in Gaza and its support for efforts in Lebanon to maintain stability, and he also expressed his pleasure with the signing of a memorandum of understanding that considers 2023 a cultural year between Qatar and the United States, as well as including The memorandum affirmed agreements in various fields for cooperation between the two peoples, strengthening our relations in various fields, and affirmed that Washington looked forward to discussions on investment, defense cooperation and other areas of cooperation.

Pompeo said in a tweet: “I am delighted to open the strategic dialogue between the United States and Qatar and a fruitful meeting with Qatari Deputy Prime Minister Sheikh Mohammed bin Abdulrahman Al Thani after that. We look forward to our cooperation in the Qatar Culture Year 2021 and work together to promote regional peace and prosperity.” A
great contribution.
A number of US officials emphasized Washington’s aspiration to strengthen the partnership between the State of Qatar and the United States of America.
During the opening session of the third strategic dialogue between Qatar and America, they stressed the role of investments in strengthening the relations of the two countries, stressing the ability of the Qatari economy to face the challenges in the region, foremost among which is the decline in oil prices. In the relief efforts of those affected by the Coronavirus pandemic around the world and its contribution to international efforts to develop a vaccine for Coronavirus.
Stephen Mnuchin stressed the importance of the Qatari-American partnership, expressing his pride in his role as Minister of Treasury in deepening this partnership through his visits to Doha, in which he met with a number of ministers, and a number of common issues and other strategic opportunities were discussed. The visit was also an opportunity to visit US forces at Al Udeid base and natural gas platforms.
The US Secretary of the Treasury expressed his country’s desire to build on the progress that has been made, especially with regard to cooperation in the areas of investment and stopping terrorist financing.
He said: The State of Qatar and the United States of America enjoy strong commercial relations, emerging markets and fair trade practices, with the continuation of cross-border investments that are encouraged by the State of Qatar, as the State of Qatar has invested more than 30 billion dollars in the American markets, and American companies continue to invest in Qatar.
Stephen Mnuchin noted the signing of a forum for investment in 2021,
stressing that it will constitute commercial opportunities for Qatari and American companies, stressing that Qatar and the United States of America are more united than ever before.
The US Secretary of the Treasury praised the Qatari policies for combating terrorist financing, combating money laundering crimes and confronting terrorist financiers, expressing his aspiration to build on these efforts and that the dialogue discussions will turn into policies approved by the two countries.
The largest investor