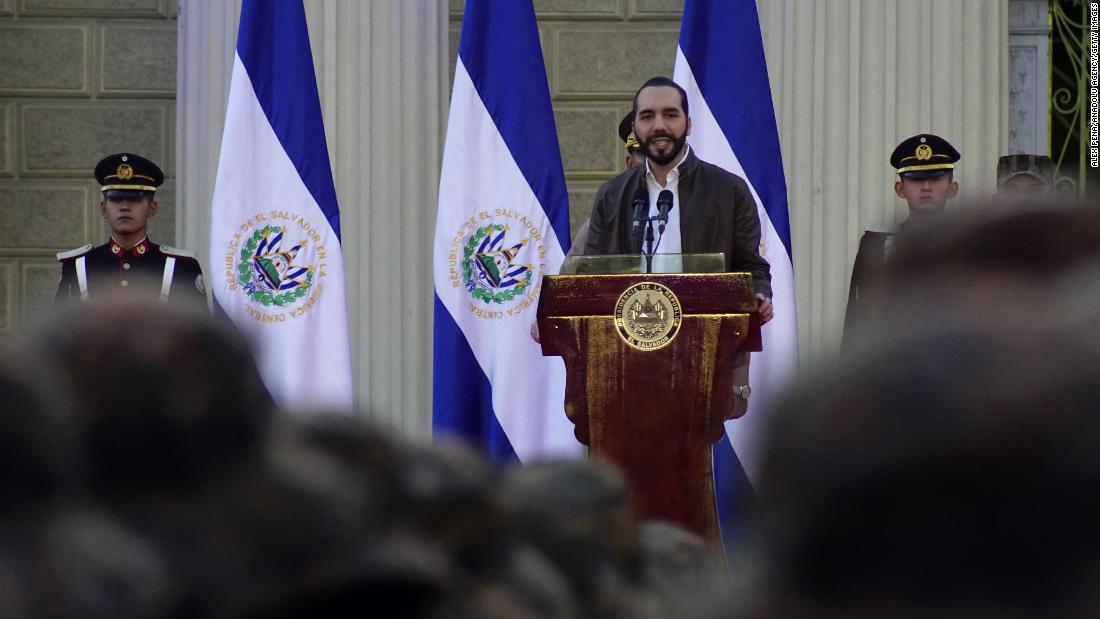 (CNN)Few world leaders have generated as much criticism and praise, often at the same time, for their handling of the coronavirus pandemic as El Salvador’s Nayib Bukele.

Even though Bukele had been president for less than a year, in March he took the dramatic step of closing his country’s border even before El Salvador reported a single case of coronavirus, arguing that the small Central American nation had to get ahead of the outbreak.
Some Salvadorans praise him for taking decisive action that may have saved his small Central American nation from the worst impacts of the coronavirus. Others say he is becoming a strongman who is violating his own country’s constitution, most recently as he spars with the Supreme Court and National Assembly about how soon El Salvador will reopen.
That Bukele, 38, is in the office at all is still something of a surprise for many Salvadorans. 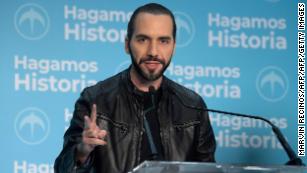 The strange political path of Nayib Bukele, El Salvador’s new President
He is the first president since the end of the Salvadoran civil war in 1992 not to belong to either of the country’s two major political parties.
Bukele’s paternal grandparents were Palestinian immigrants to El Salvador and he ran for president as social media savvy, motorcycle jacket wearing, the millennial outsider who would shake things up in a nation worn down by endless corruption and horrific gang violence.
“Bukele is very focused on getting done what he believes needs to get done, and has little patience for his critics, or for the institutions that oppose, slow, or limit his ability to act,” said Geoff Thale, president of the Washington Office on Latin America, in an email interview with CNN.
“He’s used social media to attack his critics, including journalists. He’s repeatedly attacked the National Assembly- which is dominated by the two traditional political parties, which are hostile to him.”

With nearly two million Twitter followers and polls that often show more than a 90 percent approval rating, Bukele has broken the traditional mold for politicians in his country and generated international attention. 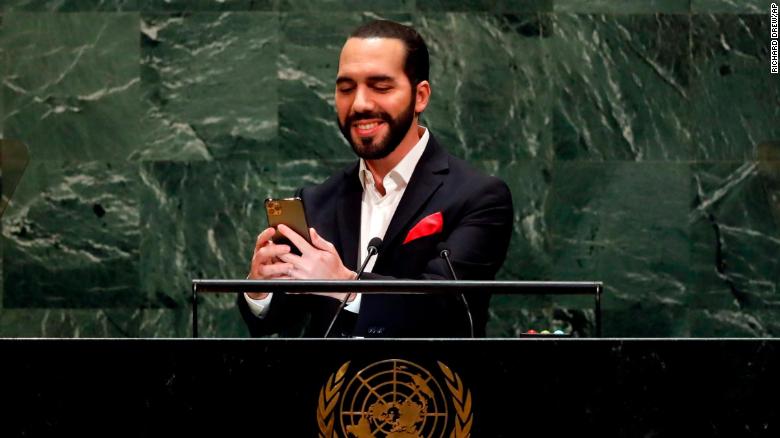 El Salvador’s President Nayib Bukele takes a selfie portrait during his addresses to the 74th session of the United Nations General Assembly.
In 2019, he acknowledged his country bore responsibility for the conditions that caused migrants to flee after the drowning deaths of a Salvadoran father and two-year-old daughter on the banks of the Rio Grande.
Ahead of making his first speech at the United Nations General Assembly in September, Bukele asked the audience to wait and first snapped a selfie, which he later said would have more impact than his prepared remarks.
But before the coronavirus outbreak, some critics in El Salvador warned that Bukele’s disruptive style was increasingly eroding the separation of powers and threatening the country’s fragile democracy.

At odds with the National Assembly

In February, as Bukele demanded the country’s lawmakers approve a request for $109 million loan to better equip police and soldiers, heavily armed troops marched into the National Assembly on his orders, which many in El Salvador saw as a blatant attempt to intimidate and a return to the era when political violence dominated the country.
The National Assembly rejected the pressure campaign and the incident hurt Bukele’s image abroad, although the Trump administration, which considers Bukele an ally on immigration and on its Venezuela strategy, did not condemn his actions. 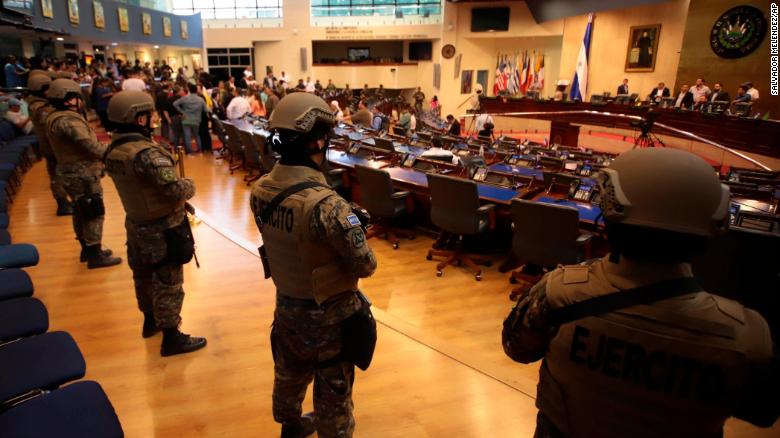 Armed Special Forces soldiers of the Salvadoran Army, following orders of President Nayib Bukele, enter congress upon the arrival of lawmakers, in San Salvador, El Salvador, Sunday, Feb. 9, 2020.)
In March, the spread of the coronavirus presented Bukele with another opportunity to act boldly or, as his critics claim, grab more power for himself.
After closing borders, Bukele put in place stringent quarantine measures but also earmarked food and money for impoverished Salvadorans.
He ordered the military to arrest people violating the new measures, sending thousands to government “quarantine centers.”
When the Supreme Court ruled the arrests were unconstitutional and ordered him to stop, Bukele refused and the soldiers remained on the streets.
“Five people won’t decide the deaths of hundreds of thousands of Salvadorans,” Bukele wrote on Twitter of the ruling. “One thing is to interpret the constitution, it’s something very different to order the death of the people.”
According to Johns Hopkins Covid-19 tracker, there have been 1,571 confirmed cases of the coronavirus in El Salvador to date, with 31 deaths attributed to the virus.

After a spike in gang violence in April, Bukele wrote on Twitter that the police and military had the authority to respond however they saw fit and his government released photos of tens of gang members shirtless and forced to sit on top of one another in prison, despite the dangers of spreading the virus further. 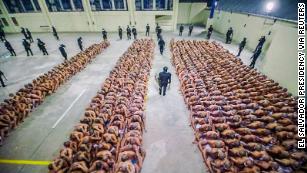 The President of El Salvador has authorized lethal force by police and military against gangs after a deadly weekend
“I thought that was very disgusting I guess it was their way of showing off to the people showing them who has the power,” said Will, a former member of the Barrio 18 gang in El Salvador, who has started a gang outreach program through a local church and is still covered by the tattoos that gangs in Central America often used to identify their affiliation.
Will asked his last name not be used out of fear that security forces might hunt him down as a former gang member. El Salvador has been wracked by decades of out-of-control gang violence, making it one of the most dangerous countries in the world.
The government’s heavy-handed response to the pandemic has halted the church group’s efforts to convince gang members to seek a new life, Will said.
“The government doesn’t know how to identify the root of the problem and keeps firing at everything that moves so we are very affected by it,” Will wrote to CNN on Facebook Messenger. “I can’t even go out without worrying what kind of police officer is going to pull me over knowing they have a license to kill now if they feel threatened.”
Despite feeling a target had been put on his back, Will said he understood Bukele’s popularity with many Salvadorans.
“Some say we are losing our democracy,” the former gang member wrote, “But to be honest it seems that he is thinking about the people and has done things that never been done in the past for the people especially those of low income.”

A showdown over reopening the country

The battle over who has the power to decide the terms of El Salvador’s quarantine will likely rage on as long as the disease does.
Bukele has said he wants the country to begin reopening on June 6th, but lawmakers in the National Assembly have said that it needs to happen sooner.
On Monday, the country’s Supreme Court overruled Bukele, saying he did not have the authority to extend anti-coronavirus measures and urged the National Assembly and president to work together to reopen the country.
But even as lawmakers proposed the bill to immediately lift the quarantine, Bukele vowed it would not become law.
Another showdown already appears to be in the works with lawmakers looking to override a president who is determined to use all his powers and beyond to stop them.
“This is a law that will massively infect Salvadorans,” Bukele wrote on Twitter. “Thank God, I can veto it.”