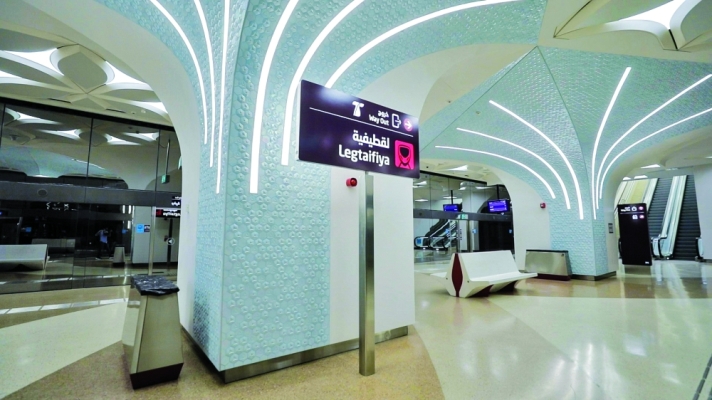 Qatar Railways Company, Qatar Rail, announced that Legtaifiya station will be ready to receive the public on the first of September, thus completing the first phase of the Doha Metro project, and the company clarified that before the start of precautionary measures throughout the country, the number of open stations in the Doha Metro network was 36. Out of 37 metro stations fully functioning, and with the opening of Legtaifiya station, all the stations of the 40-kilometer red line have been completed, and the red line, which includes the Legtaifiya station to be opened, is the longest line of the Doha metro network, enabling passengers to access a number of The main areas along its extension, including Katara, Al Bida Park, Doha Golf Club, and Hamad International Airport, and the Red Line connects Al Wakra in the south to Lusail in the north, with stations in several major areas along it.

Legtaifiya station will allow metro users easy access to The Pearl and Lagoona Mall, in addition to a group of prominent hotels in the area, including the Ritz-Carlton, Mondrian and Grand Hyatt..the station is also one of the two interchange stations between the metro and the Lusail tram, which is expected to open at a later time. Legtaifiya station includes four retail units, two ATMs and one automatic vending machine. It is expected that these commercial spaces will serve large numbers of passengers due to its strategic location close to a variety of major attractions and residential projects adjacent to the station, and Qatar Rail has pointed out that the opening of the Legtaifiya station contributes to the expansion of the Doha Metro services and allows passengers to reach a number of new destinations. It would enhance the role of the metro in the public transport system by covering the most important areas and destinations and make it an ideal transportation option for citizens and residents of the State of Qatar.

On the Wi-Fi screens of the metro. Upon subscription, passengers can automatically connect to the Internet service, in the event that they are near any metro station or during the trip.