Home News What does the WTO ruling mean for Qatar-Saudi relations? The WTO ruling in favour of Qatar’s claims against Saudi Arabia could push forward efforts for a reconciliation. 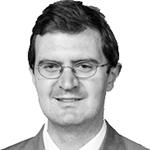