Home News Mexico imagines a world without women, in strike against gender violence By... Mexico City (CNN)What if all women in Mexico vanished? This is the question at the heart of a nationwide strike kicking off on Monday, during which women are expected to stay away from work and school in protest at surging femicide rates.

Advocacy groups have asked women across Mexico to stay at home for the day, to demonstrate against shocking levels of gender-based violence in the Latin American country.
The number of femicides — the killing of women because of their gender — has climbed in recent years. In 2019 there were 1,006 reported cases, compared with 912 the year before.
According to Mexico’s Attorney General Alejandro Gertz, femicides have increased 137% in the last five years.
Monday’s day of action follows mass protests on the streets of Mexico on Sunday to mark International Women’s Day. 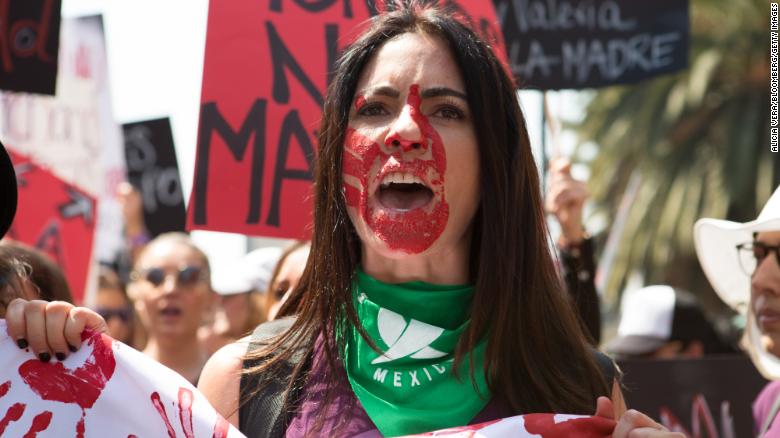 A demonstrator during a rally on International Women’s Day in Mexico City on Sunday, March 8, 2020.
Lidia Florencio was one of hundreds of women who took part in a march in Mexico City on Sunday, holding a banner emblazoned with the image of her murdered daughter, Diana Velazquez Florencio.
The 24-year-old was raped and killed not far from her house in July 2017. More than two years later, there is still no suspect, in the case. Her mother Lidia broke down in tears as she told CNN that “the government has done nothing to help.”
“Where is the murderer, where?” she asked.
Police have not responded to CNN’s request for comment on the murder, which officials classified as femicide.
Like many women CNN spoke to at Sunday’s march, Florencio said she was “demanding that the federal government take gender violence seriously.” 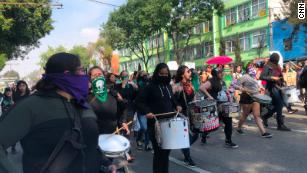 These are the faces representing Ingrid Escamilla, the young woman brutally killed and skinned in Mexico
Mexico’s President, Andres Manuel Lopez Obrador, has faced heavy criticism from activists for blaming the femicide problem on the neoliberal policies of past governments.
Following the murder of a seven-year-old girl earlier this year that shocked the nation, Obrador said the rise in gender-based killings was in part down to a society that had “fallen into decline, a progressive degradation that has to do with the neo-liberal model.”
The girl, known as Fatima, was sexually abused and beaten before she died. Her body was found inside a plastic bag in Mexico City.
Neoliberalism is a frequent target of López Obrador’s ire, but his decision to link a common political talking point to the topic of femicide angered many observers.

CNN’s Natalie Gallon and Rob Picheta contributed to this report