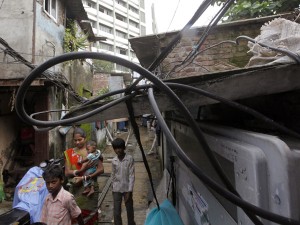 Indian people walk a narrow lane as high-voltage cables come out from an power meter at a slum in Mumbai, India, Friday, Aug. 3, 2012. India suffered the worst blackouts in history this week, which left over 600 million people without power. The lights are back on, for now, but the crisis is evidence of deep problems in a sector teetering on the edge of bankruptcy for the second time in a decade. As much as 40 percent of the power generated in India is not paid for. The bulk of it is stolen. AP/Rajanish Kakade

NEW DELHI – Every evening before Indian executive Sushmita Rao leaves her Delhi office, she phones her maid to switch on the air conditioner so her apartment is refreshingly cool when she reaches home.

“I work in an air-conditioned office and I suffocate if my place isn’t cool,” said Rao, one of hundreds of millions of Indians who went without electricity last week in the world’s worst-ever blackout.