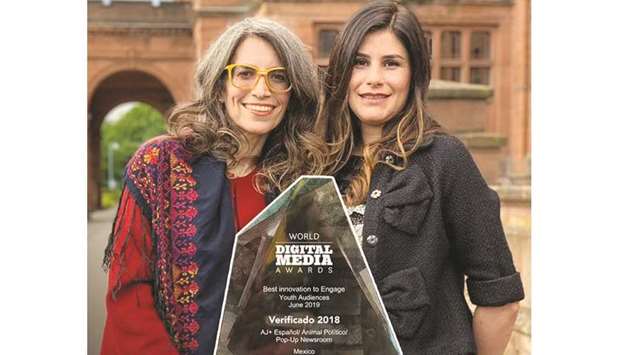 Verificado 2018, the collaborative initiative co-founded by AJ+ Espanol to verify content during the 2018 Mexican elections, has won the 2019 World Digital Media Award in the category of Best Innovation to Engage Young Audiences.
“Verificado is a living example of how far AJ+ can go in excellence and innovation: this is our first-ever journalistic initiative of this size and scope. It has become a multi-awarded project and a reference within the journalism community from Latin America to India. Congratulations to all the AJ+ Espanol and Verificado teams,” said Dima Khatib, managing director of AJ+ Channels.
During its 119 days of operation and with its 90 partner organisations, Verificado 2018 successfully engaged young people aged between 18 and 34 years, who represented 65% of the initiative’s fans and 52% of registered interactions on Facebook, Al Jazeera Media Network said in a press statement.These were mainly first-time or one-time voters.
Overall, the initiative’s Twitter and Facebook accounts racked up more than 200,000 followers on each platform, the statement noted. The World Digital Media Awards ceremony took place earlier this month during WAN-IFRA’s 71st World News Media Congress, in Glasgow, Scotland.
After winning the LATAM Digital Award, Verificado 2018 became a global finalist at the World Digital Media Awards, competing against the winners of the same category in other digital awards’ regional editions, namely Africa, Asia, Europe, the Middle East, North America and South Asia. Verificado 2018 beat regional winners from the US, India and South Africa. This is the third award won by Verificado 2018.
In addition to the World Digital Media Award, the initiative has been honoured with a LATAM Digital Award and an Online Journalism Award, from the Online News Association, the statement added. It was also a finalist at the Premio Gabo, of the Gabriel Garc?a Marquez Foundation.
Source:gulf-times.com