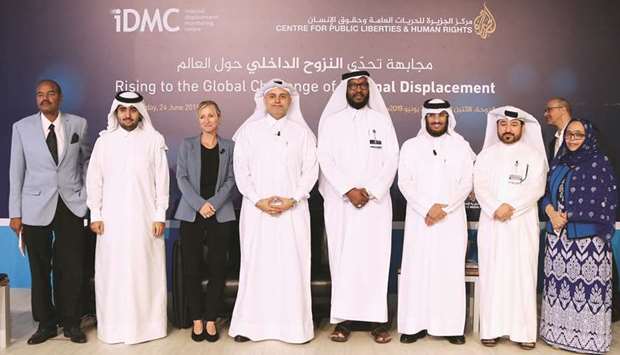 Qatar Charity (QC) has translated the Global Report on Internal Displacement (GRID) 2019, the world’s most important annual report on monitoring internal displacement worldwide, in co-operation with the Internal Displacement Monitoring Centre (IDMC) of the Norwegian Refugee Council (NRC).
In a statement, QC also announced the release of the Arabic version of the report for the first time during a panel discussion held by Al Jazeera Public Liberties & Human Rights Centre on internal displacement issues, in which officials from Al Jazeera, IDMC and Qatar Charity took part.
The Global Report on Internal Displacement (GRID) provides an overview of the world’s most significant situations of internal displacement and highlights the political and operational investments needed to address its impacts and reduce the risk of it happening in the future. The report also notes the scale of the human tragedy in the Arab region, where large communities are suffering due to disasters and conflicts.
During the panel discussion, Mohamed al-Ghamdi, assistant to the CEO in the Governance and Institutional Development Sector of QC, expressed his pride in Qatar Charity’s contribution in releasing the first
Arabic version of GRID.
He noted that the information and data contained in the report would help humanitarian workers identify areas in need and appropriate intervention and raise awareness about the phenomenon of tragic displacement and its figures growing year after year.
He pointed out that the year 2018 witnessed more than 28mn new cases of internal displacement across the world, 10.8mn cases due to conflict and violence and 17.2 cases due to natural disasters in several countries, including Arab countries such as
Syria, Yemen and Somalia.
He said the Arabic version of the report was one of the aspects of QC’s co-operation with IDMC and the result of a partnership agreement signed between two sides in Geneva last May, noting that the displacement issue has become a source of concern for charitable organisations, humanitarian workers and UN
agencies.
Tariq al-Ansari, director of the International Co-operation Department at the Qatari Ministry of Foreign Affairs, applauded QC for its partnership agreement with IDMC and translating GRID into Arabic.
The phenomenon of internal displacement is a serious issue, with its impact on the regional and international level, al-Ansari added, emphasising a great need to obtain correct data from specialised displacement and asylum monitoring centres,
including IDMC.
On the sidelines of the panel discussion, Alexandra Bilak, director of IDMC, considered the translation of GRID into Arabic as a significant development. “Strategically, this is very important development in our history that our report is finally going to be available in Arabic,” said Bilak, extending thanks to Qatar Charity for this translation.
Hassan Saeed Elmogumme, head of the Partnerships and Research Section of Al Jazeera Public Liberties & Human Rights Centre, said the translation of GRID underscored the great role of QC in sharing information with the Arabic-speakers, and its significant efforts in drawing the attention of decision-makers and humanitarian organisations in the region to the issue of internal displacement.
Qatar Charity signed a strategic co-operation and partnership agreement with IDMC in Geneva, Switzerland, in the field of training and capacity building to improve data collection and analysis and collaborate on research projects on internal
displacement worldwide.