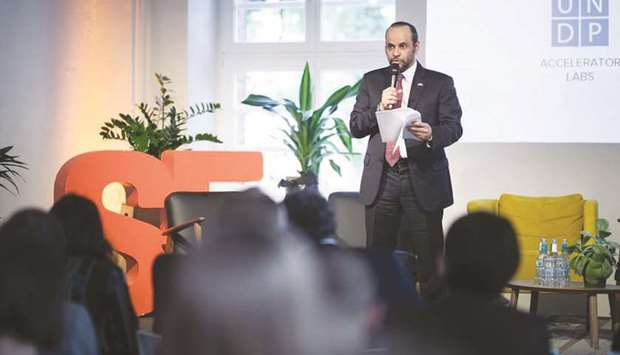 The United Nations Development Programme (UNDP), in partnership with Qatar – represented by the Qatar Fund for Development (QFFD), the Federal Republic of Germany (German Co-operation) and the Italian government, has launched a global network aimed at finding innovative ways to solve complex sustainable development problems.
Qatar’s involvement is in line with its efforts to achieve the UN Sustainable Development Goals at the national and international levels, and to continue to achieve this goal through strong and effective partnerships, according to a press statement.
QFFD has made a $20mn contribution to the UNDP accelerator labs network in 60 developing countries for a period of four years, from 2019 to 2022. This is done through a grant agreement signed between QFFD and the UNDP on the sidelines of the Doha  Forum in December 2018.
Sheikh Saud bin Abdulrahman al-Thani, Qatar’s ambassador to Germany, represented QFFD and gave a speech at the opening ceremony in Berlin marking the UNDP Accelerator Labs Network launch.
The ceremony was also attended by Martin Jager, state secretary of the Federal Ministry for Economic Co-operation and Development (Germany), and Achim Steiner, United Nations Development Programme administrator.
In addition to the $30mn contribution made by the German government, a similar cost-sharing agreement was also signed with the Italian government, which contributed 5mn euros to this project.
The project aims to establish a network of laboratories to accelerate development impact, guided by relevant policies and guidelines of UNDP.
The network also aims to capture and nurture local solutions, turn them into actionable intelligence and make that intelligence available to countries belonging to the Accelerator Lab Network and to the entire development community.