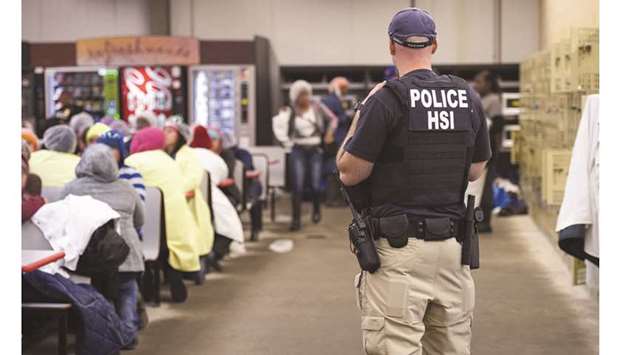 US officials said that some 680 undocumented migrants were detained in a major series of raids on Wednesday at food processing plants in the southeastern United States, part of President Donald Trump’s announced crackdown on illegal immigration.
Most of those detained by Immigration and Customs Enforcement (ICE) agents were Hispanic migrants, officials said.
TV footage showed lines of arrested migrants heading to buses parked outside the processing plants with their hands behind their backs under the watchful eyes of ICE agents.
Those who were not detained, including some children, stood by waving at their friends and relatives.
Several wiped away tears as they gave their farewells.
“Special agents executed administrative and criminal search warrants resulting in the detention of approximately 680 illegal aliens,” said Mike Hurst, US Attorney for the Southern District of Mississippi.
“They have to follow our laws, they have to abide by our rules, they have to come here legally or they shouldn’t come here at all,” Hurst said at a news conference.
The US attorney did not spare the employers.
“To those who use illegal aliens for competitive advantage or to make a quick buck, we have something to say to you: If we find that you have violated federal criminal law, we’re coming after you,” he said.
Matthew Albence, the interim ICE head, said the raids were the result of a year-long investigation.
He said that the children of detained parents will be sent to live with relatives or other families.
Some of the migrants will be released with electronic ankle monitors as they await a court hearing.
ICE agents raided plants in the towns of Morton, Carthage, Canton, Pelahatchie, Sebastopol and Bay Springs, all in the state of Mississippi, officials said.
“After speaking with the agents, I now know that they are identifying illegal immigrants, versus those who are legal, and rounding them up, putting them in buses and carrying them away,” Canton Mayor William Truly told the local ABC News television affiliate.
Chokwe Antar Lumumba, the mayor of Mississippi state capital Jackson, took to social media to seek help for the migrants.
“I’m calling upon faith institutions in our community to become sanctuaries for our immigrant neighbours and protect them from potential harm,” he wrote on his Facebook account. “The ICE raids are both dehumanising and ineffective as a tactic for protecting citizens from potential harm.”
In June, Trump tweeted that the ICE “will begin the process of removing the millions of illegal aliens who have illicitly found their way into the United States”.
He has also tweeted several times about an alleged “invasion” of people crossing the southern border into the United States.
Yesterday Mexico said that 107 of its citizens were among the 680 undocumented immigrants detained in the raids.
Foreign Minister Marcelo Ebrard said the government would provide consular assistance and “guarantee the adequate legal defence of all Mexican nationals” detained in Wednesday’s raids in Mississippi.
Those who are deported will have the government’s support to access employment, education and healthcare in Mexico, he told a press briefing.
Ebrard, who has the tricky task of handling US relations in the face of Trump’s frequent anti-Mexican attacks, did not criticise Wednesday’s raids, hewing to President Andres Manuel Lopez Obrador’s line of avoiding confrontation with Mexico’s crucial neighbour and trading partner.
But he said Mexico would ask the Inter-American Commission on Human Rights to inspect the detention centres where the migrants are being held.
He also announced that Mexico City would host a meeting of Latin American officials on August 15 to “discuss the defence and promotion of Spanish-speaking civilisations and culture … especially in the United States”.