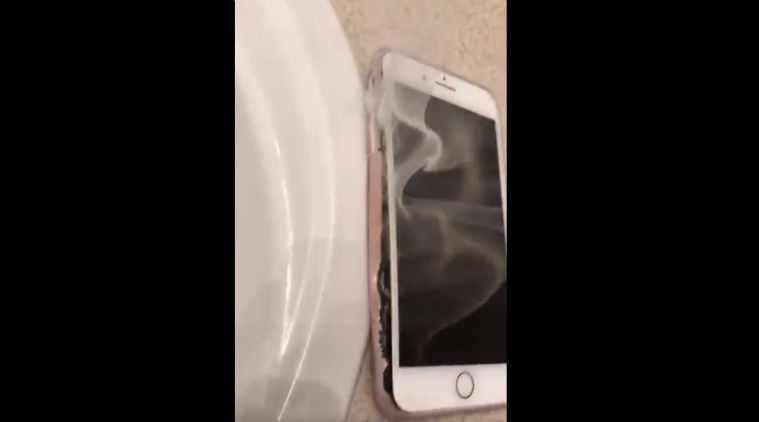 An iPhone 7 Plus user has claimed her smartphone exploded and started spewing smoke even though it wasn’t being used. The video of the incident posted on Twitter by Brianna Olivas shows flames coming from her Rose Gold iPhone 7 Plus with the plastic case melting away. The video has been viewed 1.91 million times and Retweeted by more than 25,000 Twitter users. “So my iPhone 7 plus blew up this morning 🤗 was not even using it, literally no explanation for this,” Olivas said.

Olivas told Mashable, the iPhone 7 Plus that she had bought in January from Sprint, refused to turn on day before yesterday. Upon taking the phone to an Apple Store, she was told by employees everything was fine. “The phone appeared to be working normally again,” she said. However, her iPhone 7 Plus caught fire the next morning while sitting on a dresser.

Olivas, in a direct message to Mashable on Twitter said she was asleep with the phone charging next to her head when her boyfriend grabbed it and put it on the dresser. “He went the the [sic] restroom … and from the corner of his eye he saw my phone steaming and [heard] a squealing noise. By the time he got over to the phone it had already caught fire, he quickly grabbed the phone and threw it in the restroom … as soon as he threw it in the restroom is [sic] blew up and more smoke started coming out of the phone,” she said.