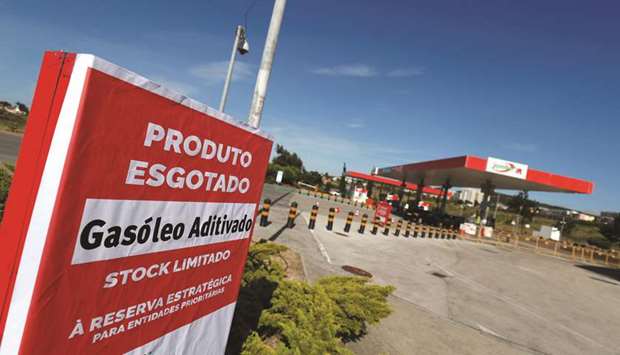 The Portuguese government imposed fuel rationing at petrol stations and called in police drivers to deliver fuel yesterday to prevent a strike by hauliers from paralysing the country at the height of the tourist season.
Demanding better salaries and working conditions, fuel tanker drivers staged a similar damaging strike in April in what was Portugal’s worst outbreak of industrial unrest in years.
By afternoon yesterday 18% of the country’s filling stations were completely out of fuel, and 17% were partially running dry.
Prime Minister Antonio Costa had guaranteed that minimum services would be maintained but the picture worsened as the day wore on, with striking drivers accused of failing to provide the promised basic level of supplies.
“Unfortunately, there has been a change in the situation compared to what happened this morning,” Costa told reporters, adding that the most affected region was the tourist-packed Algarve in the south.
He said insufficient fuel cargoes had reached Lisbon airport and that police drivers were now transporting fuel.
The strike that was staged in April provoked heavy criticism of Costa’s Socialist government, but this time better contingency planning could even benefit the administration in an upcoming parliamentary election on October 6, analysts say.
The government declared an energy crisis on Friday ahead of the strike, allowing it to ensure full supplies to ports, hospitals, airports and other priority consumers and decreed minimum services for the country’s network of filling stations.
The fuel rationing for the public restricts drivers to a maximum of 15 litres of petrol or diesel per filling at specially designated stations.
Tanker drivers decided to stop work after talks with employer association ANTRAM over better pay failed.
“Our profession is unappreciated and very badly recognised by employers,” Nuno Ezequiel, who has worked as a driver for more than two decades, told Reuters. “Our work means days without families, daily pressure and physical and mental distress.”
ANTRAM also said drivers were not ensuring minimum services and further legal steps should be taken by the government allowing it to order drivers back to work because of a national emergency.
Costa said he is not yet ready to do that.
The National Hazardous Materials Drivers’ Union (SNMMP), which called the strike, denied that minimum services are not being met.
“We have been fulfilling minimum services right from the beginning,” said SNMMP’s vice-president Paulo Pardal Henriques.
Costa urged the union and employers to resume talks.