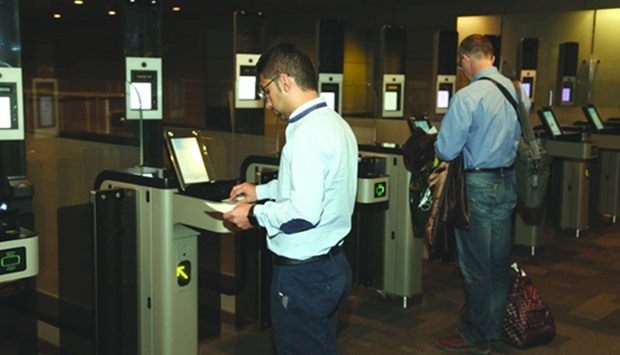 More e-gates at the Hamad International Airport (HIA) will become necessary with the facility becoming popular among residents, Qatar Airways Group Chief Executive Akbar al-Baker has said.
He said the Ministry of Interior was investing heavily into “constantly upgrading the (e-gates) system.”
“It will become more and more efficient and get much faster in processing the user’s data,” al-Baker told Gulf Times yesterday.
“I am sure we will eventually have to add more lanes of e-gates to process the large numbers of residents, who are now queuing up at the emigration counters,” al-Baker said.
Recently, the Ministry of Interior (MoI) activated e-gate services on ID cards and passports of resident expatriates free of charge.
This service can be accessed by resident expatriates with ID cards and their children above 18 years without the need for prior registration
There are 19 e-gates in the departure lounge and 16 e-gates in the arrival lounge of Hamad International Airport, the MoI said.
Al-Baker said Qatar was among the very few countries that had introduced e-gates on a major scale, some 10 years ago.
“Unfortunately, many people did not want to use it for several reasons. Now the e-gates facility has been upgraded in a big way… now they are faster… more bio-metric friendly… and the cards are now free.”
Al-Baker requested residents to utilise the e-gates facility, which he said, “not only reduces the stress on the emigration counters, but also make their entry into the country, smoother.”
Earlier, the Ministry of Interior explained that the use of electronic gates was very easy.
“A passenger has to place his/her ID card or passport on the e-reader at the e-gate, which will read the vital data stored on the card or the passport and verify them.
“Then the device will direct the passenger in Arabic or English to move ahead as the first glass barrier will be opened making access for the passenger to the middle of the e-gate.
“Now the device will match the data obtained from the travel document by capturing his/her eye print and fingerprint and if the data matches the device will open the final exit gate which enables the traveller to move to the boarding gate or baggage collection area. This process does not take more than two minutes, whether to enter or exit,” a senior MoI official had said earlier.