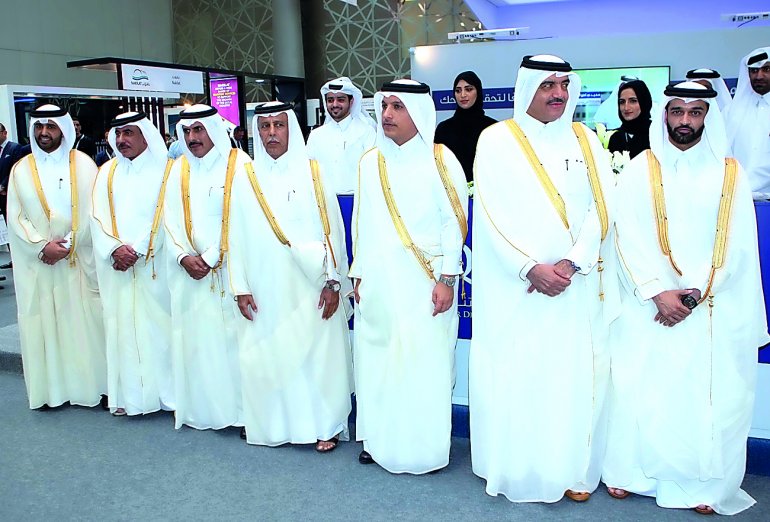 Entities under the Tenders and Auction Law have spent QR39bn over the past nine months on public projects, which have been awarded to private companies and institutions, including Small and Medium-sized Enterprises (SMEs), as a result of the initiatives launched by the State, Finance Minister H E Ali Sherif Al Emadi said.
Addressing the second edition of the Contracting Conference & Exhibition ‘Moushtarayat 2017’ which opened yesterday, the Minister said the Government has taken several initiatives to establish an appropriate environment for expanding SMEs’ contribution to infrastructure, services and public utilities as part of its strategy to encourage and increase the participation of the private sector in the public economic development plan at all levels.
Deputy Prime Minister and Minister of State for Cabinet Affairs, H E Ahmed bin Abdullah bin Zaid Al Mahmoud inaugurated the exhibition. The expo, an SME-dedicated procurement and contracting event, is offering at least 2,000 business opportunities worth more than QR2.5bn, it was disclosed yesterday. The event is an important opportunity to support communication between ministries, government agencies and private sector companies, including SMEs, to exchange views on cooperation between the public and private sectors in providing a competitive environment for business and to learn about successful experiences in this field, he said.
Qatar is moving towards supporting economic activities in non-oil sectors while enhancing the private sector’s role in implementing a wide range of development projects, Finance Minister Al Emadi added.
He stressed Qatar’s keenness through issuing the new Tenders and Auctions Law in order to enhance competition’s opportunities, transparency and efficiency in contracting procedures concluded by the government agencies.
The government has adopted and developed modern management methods, which rely primarily on centralisation of policies and decentralised implementation, in order to diversify the Qatari economy’s structure, expand the role of the private sector and encourage private initiatives aimed at exploiting the available capabilities, especially in the industry and trade sector, he added.
The Deputy Prime Minister honoured five companies who won first edition of the ‘National Purchasing Award’ launched for the first time in appreciation of the role being played by government and semi-government agencies in supporting Small and Medium-sized Enterprises (SMEs) and providing them with the opportunity to showcase their services and products.
Abdulaziz bin Nasser Al Khalifa, CEO of Qatar Development Bank (QDB), in his speech, said: ‘Moushtarayat 2017’ aims at spreading a culture of cooperation among exhibitors from the government and semi-government sectors, private companies as well as SMEs, that face great difficulties in accessing bid opportunities. He stressed that this year’s edition witnessed an increase in terms of number of exhibitors, that rose from 25 to 30, offering at least 2,000 opportunities worth more than QR2.5bn compared to 450 opportunities only last year amounting to QR3bn.