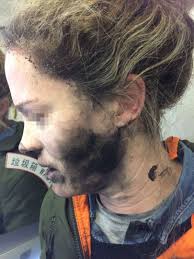 The woman whose headphones caught fire during a February flight from Beijing, China to Melbourne, Australia was wearing a pair of AAA-powered Beats, according to the Australian Associated Press. What’s more, the report states that a representative for Apple, which bought Beats in 2014, told the woman’s lawyer that the company’s investigation into the incident blames the use of a “third-party battery” for the cause of the explosion, though it’s unclear what that means. Apple has not responded to a request for comment.

The woman, whose name has not been released, was asleep during the flight when “a loud explosion” was heard by other passengers, according to a March report from the Australian Transport Safety Bureau. “As I went to turn around I felt burning on my face,” she told the ATSB. She then threw the headphones on the floor, and flight attendants flushed them with water.