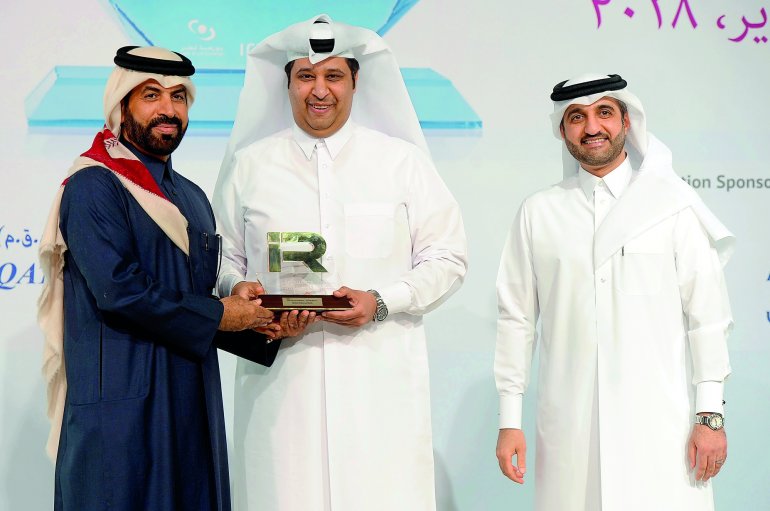 DOHA: Qatar National Bank (QNB) has won five top awards, including the best Qatari company award and best large cap company award, at the 3rd Annual IR Excellence Program.
Qatar Stock Exchange (QSE) announced the winners of the 2017 IR Excellence Program at a high-profile event held on Tuesday. Developed and executed by Iridium, the Investor Relations (IR) Excellence Program surveyed the expert opinion of the domestic and international investment community. The programme also featured a detailed ranking of corporate investor relations websites.
In addition to winning the “ Best Qatari company overall” and “Best large cap company”, QNB’s Ramzi Mari won the “Best Chief Financial Officer Award”. QNB’s website has been adjudged as the “Second best investor relations website”.
Vodafone bagged the “Best Mid Cap Company Award” and Al Meera won “Best Small Cap Award”. Ooredoo’s Andreas Goldeau is the “Best Investor Relations Officer.
Ooredoo and Aamal won first and third best investor relations websites, respectively.
Rashid Bin Ali Al Mansoori, CEO of Qatar Stock Exchange, expressed satisfaction of the advanced IR level achieved by Qatari listed companies and said: “For the third year running, we have rewarded companies and individuals that have demonstrated the highest investor relations standards in the country.”
“The IR Excellence Program reflects Qatar Stock Exchange desire to achieve best international practice among our listed companies for a transparent investment environment. Despite the challenging trading environment in Qatar, a consequence of a perceived uncertainty on future earnings for our listed companies, many stocks continue to report strong results, demonstrating the resilience of Qatar’s economy and the quick strategic choices made by individual companies. Even so, as a best IR practice, it is important for our listed companies to increase transparency during these times of uncertainty,” Al Mansoori added.
Oliver Schutzmann, CEO of Iridium Investor Relations said: “The QSE’s IR Excellence Program is a testament to the Exchange’s commitment towards achieving quality investor relations to improve market accessibility and support the development of successful capital markets. We would like to congratulate the Qatar Stock Exchange on their commitment to this initiative and the winners for raising the bar.”
Abdul Aziz Al Emadi, Director, Listing Department of QSE, said: “Qatar Stock Exchange has been actively promoting IR for a number of years, we want to see our listed companies committed to improving the flow of information in the market, because they are the corporate ambassadors for Qatar.”
“As a direct result of the Excellence Program, we have noticed that a number of companies have made a meaningful contribution to their IR efforts in 2017. We look forward to seeing a stronger engagement from the remaining companies, in order to further improve the IR standards across all Qatar listed companies,” Al Emadi added.
On his part Yousuf Mohamed Al Jaida, QFC Authority Chief Executive Officer, stated: “We are very happy to be supporting the 2017 IR Excellence Program. As a global financial center responsible for attracting FDI, we put great importance on investor relations and see it as a vital part of Qatar’s economic ecosystem. On behalf of the QFC, I would like to congratulate this year’s winners for their commitment to adopting international standards in transparency and IR and in turn supporting our objectives of transforming Qatar into a leading business and financial hub.”
The Excellence Program was launched in 2015. The Program is globally benchmarked against best practices to ensure a transparent methodology. The methodology and all ranking criteria were made public via the QSE’s website and other public channels. This enabled all listed companies to review categories and selection criteria, and gave them several months advance notice to improve their investor relations efforts.
The IR Excellence Program features a mobile digital tool for website rankings. The tool enables companies to see their website ranking broken down into technology, content and service, and the areas of improvement of their 2017 score. The 2017 Program was launched in October, the evaluation began in November and was concluded in December 2017.