Home News The Girls of the Taliban 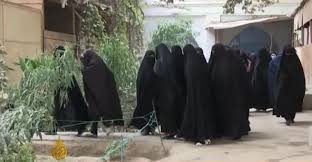 Kunduz in northern Afghanistan is the country’s fifth largest city and home to more than 300,000 people.