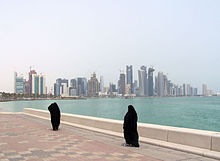 The Doha Corniche (Arabic: كورنيش الدوحة‎) is a waterfront promenade extending for seven kilometers along Doha Bay in the capital city of Qatar, Doha.[1] Annual celebrations of national holidays such as Qatar National Day and National Sports Day[2] are centered on the Doha Corniche.[3] It is a popular tourist and leisure attraction within Qatar.[4] 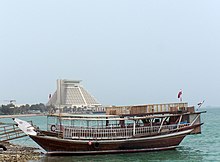