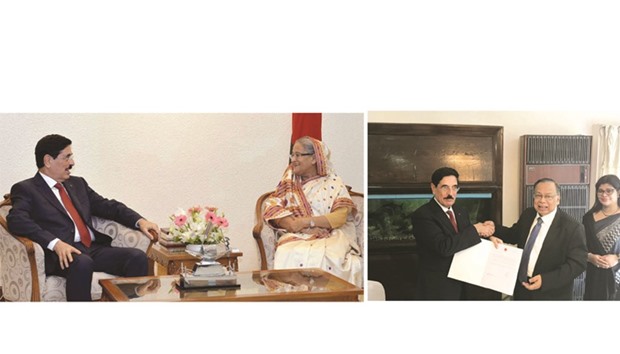 angladesh has extended its support to the Qatari candidature in the post of director general of United Nations Educational, Scientific and Cultural Organisation (Unesco).
Prime Minister Sheikh Hasina extended the support when HE Dr Hamad bin Abdulaziz al-Kuwari, the adviser to the Emiri Diwan and the Qatari candidate for the Unesco director general’s post, paid a courtesy call on the PM at her office in Dhaka yesterday.
Briefing reporters after the meeting, PM’s Press Secretary Ihsanul Karim said during the meeting, Dr Hamad sought Bangladesh’s support to his candidature for the Unesco director general’s post.
In response, the prime minister told Dr al-Kuwari: “I’m glad at your candidature at the post and you will get our support,” the press secretary quoted the prime minister as saying.
Sheikh Hasina also said she is very happy to know that for the first time a candidate from Arab countries is contesting the post.
HE al-Kuwari informed the prime minister that the election to the post of Unesco director general will be held in October next in Paris.
The premier expressed satisfaction over the existing friendly relations between Bangladesh and Qatar and hoped that the traditional and brotherly ties would be consolidated further in the days to come. She also recalled her visits to Qatar.
Dr al-Kuwari highly appreciated the dynamic leadership of Prime Minister Sheikh Hasina as a woman leader in the Muslim world and said others should follow her.
He also lauded Bangladesh’s stunning success in socioeconomic development and education sector under the stewardship of the prime minister.
Spelling out various steps for her government for the development of the country and its people, Sheikh Hasina said the main aim of her government is to eradicate poverty.
While talking about the signing of a memorandum of understanding on strengthening cultural co-operation, between the two countries, Dr al-Kuwari said the MoU would be inked during a suitable occasion.
Dr al-Kuwari also pointed out election of the prime minister’s daughter Saima Wazed Hossain as the Chairperson of the International Jury Board of Unesco-Emir Jaber al-Ahmad al-Jaber al-Sabah Prize for Digital Empowerment of Persons with Disabilities.
Dr al-Kuwari said he is aware about this as well as other noble work on autism and the children with disabilities by Saima Wazed Hossain, who is also the chairperson of the National Advisory Committee on
Autism Bangladesh and a member of the World Health Organisation Expert Advisory Panel on Mental Health.
PM’s Principal Secretary Dr Kamal Abdul Naser Chowdhury, PMO Secretary Suraiya Begum, PM’s Military Secretary Major General Mia Mohamed Joynul Abedin and ambassador of Qatar in Dhaka Ahmed bin Mohamed al-Dehaimi were present.