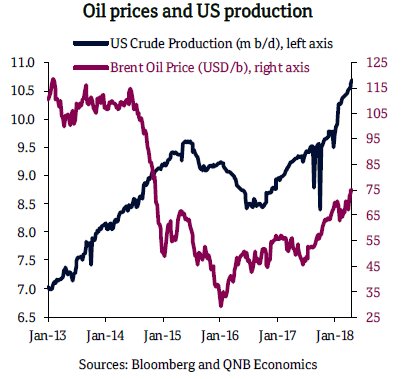 DOHA: QNB has revised up its forecasts for average annual oil prices to $69/barrel for 2018 from $63/b, and to $66/b for 2019 from $61/b. QNB analysts expect oil prices to retreat from their current highs later this year as the impact on Iranian oil exports from new US sanctions is likely to be mitigated by increased exports elsewhere and by weakening demand growth.

In its weekly economic commentary, the QNB noted oil prices reached new highs for the year last week, peaking at $79/barrel with the last leg up given mainly by the news that the US is withdrawing from the international nuclear deal with Iran.